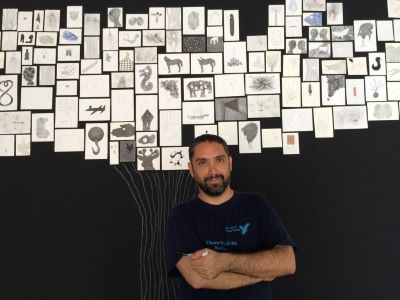 Douglas Rodrigo Rada was born in La Paz, Bolivia, in 1974. He has participated in exhibitions in different countries, including Australia, Chile, Spain, the USA, Brazil, China, Argentina and México.

In 2003 he participated in the Residency Program at APEXART- New York, USA. In 2005 he was awarded the First Prize at the SIART Biennale in Bolivia. In 2008 he was part of the BATISCAFO artist residency in La Habana, Cuba; and showed works at VIDEOARDE curated by Laura Baigorri at the Spanish Cultural Centre. In 2010 he participated in the group exhibition “BOLIVIA: Los caminos de la escultura”, at Fundación Simón I. Patiño and was invited to the URRA art residency, Buenos Aires, Argentina.

In 2011 he was part of MIAMICITO curated by Raquel Schwartz in Dot 51 Gallery, Miami USA; in the Retrospective of SIART Biennale at AEC Contemporary Art Space, Montevideo, Uruguay; and in FASE3, in the Recoleta Cultural Space, Buenos Aires Argentina; He also showed at NAVI project in the Mercosul Biennale.

In 2014, he co-edited the book "Performance and Actionism in Bolivia since 1980", and he participated in MUTATIONS at Tiwani Contemporary, London-England. In 2015 he was a guest resident at TEORÉTICA space in San José, Costa Rica and participated as a guest curator at the Rapaces residence in Nicaragua.

Since 2016 he is the curator of the NUBE / KIOSKO project in Santa Cruz- Bolivia.

Douglas joins us for the onAIRISM - challenges and transitions conference in November 2021.