A project by IGBK, the International Theatre Institute (ITI) Germany and Dachverband Tanz Deutschland (DTD), initiated and supported by the Federal Government Commissioner for Culture and the Media

Mobility is a central aspect of artistic work. Collecting new impressions, exchanging thoughts with colleagues abroad as well as continuously redefining one’s own position are part of the process. Thereby exhibitions and projects abroad, residencies or international guest performances are a matter of course today.

But with an increase in mobility, artists do not only face a jungle of support schemes and grants, also the need for secure information regarding social law, taxation and insurance issues or administrative procedures is growing, both, within and beyond EU borders.

A database of support schemes for international projects as well as checklists and sample documents etc complement the information.

In April 2013 www.touring-artists.info was presented to the public. The launch of the website was accompanied by a symposium at the Radialsystem V (Berlin). In lectures and panels experts focused on issues like the granting of visas, subsidy programmes and information services. 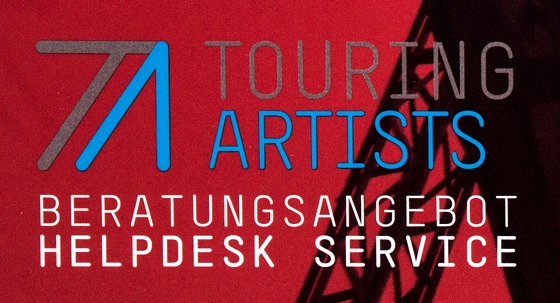 Appointments for consultancy can be made at This email address is being protected from spambots. You need JavaScript enabled to view it., the service is free of charge.

Since spring 2018, the portal has also provided information specifically for artists and cultural workers from Turkey who are temporarily or permanently working in Germany or are planning to do so. Information about residence and work permit, taxes, social security, transport and customs are published here in Turkish and English.

Starting September 2018, touring artists is also offering an extended helpdesk service, welcoming artists and culture professionals who were forced to leave their home countries and are now residing in Germany.

The information portal has been enhanced accordingly with corresponding information in German, English and Arabic.

The enhanced service for artists and culture professionals from countries affected by crisis is part of the project "International Artists Info Berlin" – a cooperation of IGBK, ITI and DTD with SMartDe – Netzwerk für Kreative e.V., supported by the Senate Department for Culture and Europe Berlin, programme "Weltoffenes Berlin".

The information on touring artists has so far focused on the performing and visual arts. In cooperation with the European Music Council, a start is made in 2019 to expand the information systematically also for the music sector - by now in German, hopefully in English soon as well.

Under Music in Germany you will find an overview of the music landscape in Germany. Specific aspects concerning the musical sector are added under artist status and contracts (in German, hopefully soon in English as well) and also the feature on further information portals has been enhanced.

The touring artists helpdesk service is available to artists and creative professionals of all disciplines and is also used by musicians and culture professionals in the music sector.

Information in the field of music in cooperation with the European Music Council, funded within the framework of the Program Creative Europe of the European Union as well as by the Federal Government Commissioner for Culture and the Media (BKM) and the City of Bonn.

Together with its cooperation partners IGBK organises a series of events to present the information tool to the public and to discuss single topics in detail. A selection of dates: