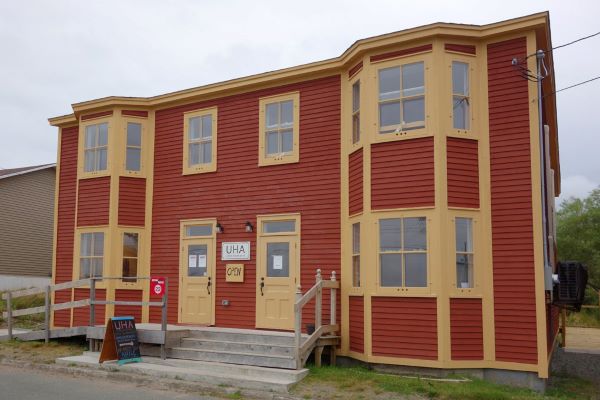 Jane Walker from Union House Arts (UHA) recorded a conversation with Rona Rangsch on UHA's work and on the issue of artists residencies in September 2021. She also joins us for the onAIRISM - challenges and transitions conference in November 2021.

Union House Arts (UHA) is a community artspace in Port Union. UHA is committed to supporting new work by artists and craftspeople through place-specific dialogues and collaborative programming in Port Union. Its building is home to an art gallery, community kitchen, workshop space, studios, and artist accommodations.

UHA respectfully acknowledges that the land it occupies is on the ancestral homelands of the Beothuk, and that Ktaqamkuk (the island of Newfoundland, part of Mi’kmaki) is the ancestral homelands of the Mi’kmaq and Beothuk. UHA would also like to recognize the Inuit of Nunatsiavut and NunatuKavut and the Innu of Nitassinan, and their ancestors, as the original people of Labrador. UHA recognizes the colonial context of its settlement and its impact on its past, present, and future. Union House Arts strives to build awareness, understanding, and allyship with Indigenous peoples and settlers across the province and Turtle Island (the land mass also known as North America).

UHA aims to build a thoughtful space for community residents and artists to work and share together; to expand ideas about what art can be, how and where it can be shown, and to create an environment that is accessible to people of all experiences and educations. The space is experimental in nature with a focus on place-based programming and knowledge building and sharing.